Courage to the Bone

A Job of Courage,Patience and Steel Nerves

Ice bridges are generally annual winter season formations which provide transportation access to and from communities, mineral deposits, and energy sources that have no permanent road access.
They are best known for their role in the transportation system of in isolated regions in Canada's north,
primarily because of documentaries and TV series such as Ice Road Truckers.

In general, ice roads and winter roads are used in areas where construction of year-round roads is expensive or impractical. When frozen in winter, the waterway crossings can be built up with a system of auger holes to flood and thicken the crossing. Depending on the region, these seasonal links last anywhere from a few weeks to
several months before they become impassable. 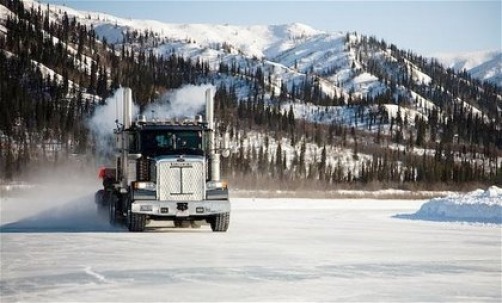 Ice roads and winter roads play a crucial role in the transportation of goods to communities without permanent road access.
In many of these communities, air transportation is used at other times of the year to bring in goods including food and supplies, but this can be prohibitively costly for bulky goods such as building supplies and heavy equipment. 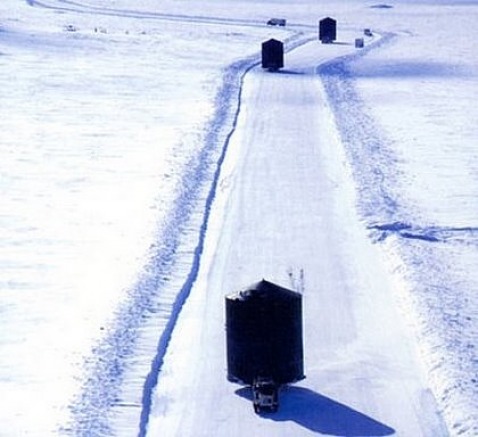 Ice roads are different from winter roads in that they are intentionally built primarily across frozen waterways.
Because these are comparatively flat, devoid of trees, rocks and other obstacles, the lakes are easier to clear a path across than bare land, and they can provide a smoother driving surface.
The roads built from Yellowknife to Port Radium by John Denison, an early pioneer of ice roads in the Canadian Arctic
1950s-1970s, were almost entirely plowed across frozen lakes, with a short overland portage between the shoreline of one lake and the beginning of the next. 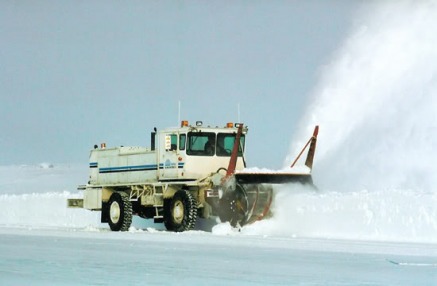 After an ice road is plowed across a lake, the ice there gets much thicker than the surrounding lake ice, because
the snow cover has been swept off—exposing the road directly to subfreezing air with temperatures as low as −60 °F (−51 °C). When a lake thaws in the spring, the ice under the road is the last to melt, and in the summer, traces of the roads can still be seen from overhead in a bush plane, as bare strips remain on the lake floor where the ice blocked light and
prevented plants and algae from growing.

While easier to drive across in the winter than land, frozen lakes still present a great danger to truckers hauling cargo across. Speeds are generally limited to 15 mph (24 km/h) to prevent the weight of a truck from starting waves under the lake surface, which can dislodge the ice from the shoreline and create a hazard.

Another hazard on large lakes is the pressure ridge, a break in the ice created by the expansion and contraction of
the surface ice over time due to heat. 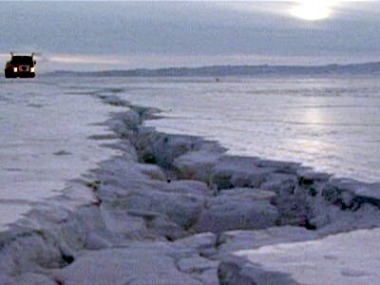 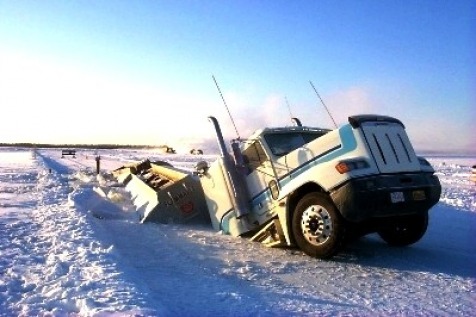 The roads are normally the domain of large trucks, an example of which would be the tractor-trailer unit,
although lighter automobiles, such as pickup trucks, are occasionally seen, as are snowmobiles. 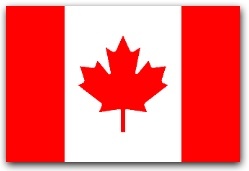 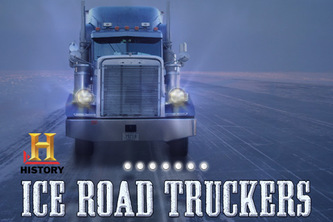 See my 2 versions, with the original Music en the youtube Music version